A Privileged Destination. Heir to ancient cultures and a rich colonial tradition, Peru is a magical spot which involves one of the richest biodiversities of Earth, and is a melting pot of different cultures who together are forging the promise of a better future. ©PROMPERÚ

Here you can download more information to help you organize your trip and discover all the wonders that Peru offers you.

Here you can download more information about the Gastronomy that our Peru offers you.

Here you can download more information about the city of Lima and its tourist places.

The ancient Inca capital is a unique blend of pre-Columbian past with Spanish architecture. Its temples, squares and streets are surrounded by hills among which are hidden amazing sites such as Sacsayhuaman and Qenqo, Puca Pucara and Tambomachay.

The “lost city of the Incas” is the main reason why thousands of people come to Peru. Hidden among the vegetation, get closer to our past through its ranches, temples, bridges and religious sites, built in communion with the surrounding landscape.

Get ready to explore Lima’s old town, a UNESCO World Heritage Site, which is filled with fascinating historic buildings. Start the tour with the Larco Museum, located in the traditional district of Pueblo Libre and housed in a beautifully restored viceregal mansion, which itself is built on top of a 7th century pre-Columbian pyramid. The museum has a very complete pre-Hispanic collection of gold and silver objects, as well as pieces of erotic art. Next, head to the Casa Aliaga, a colonial mansion granted in 1535 by the conquistador Francisco Pizarro to one of his captains, Jerónimo de Aliaga. This is the only house of the period that still belongs to the same family. Continue with a scenic tour of the colonial center. Visit the Plaza de Armas, where you can appreciate the grandiose architecture of the Spanish Empire. There you will find its magnificent Cathedral, built in the 16th century. Finish the tour returning to your hotel. 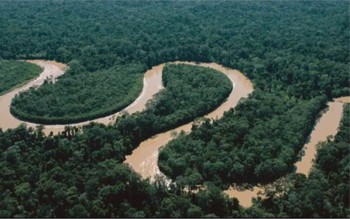 Amazon River Also called Rio Marañón and Rio Solimões, this being the largest river in South America and the largest drainage system in the world in terms of the volume of its flow and the area of ​​its basin. The total length of the river, measured from the headwaters of the Ucayali-Apurímac river system in southern Peru, is at least 4,000 miles (6,400 km), making it slightly shorter than the Nile River, but equal to the distance from New York to Rome. Its westernmost source is high in the Andes Mountains, within 100 miles (160 kilometers) of the Pacific Ocean, and its mouth in the Atlantic Ocean, on the northeast coast of Brazil. However, both the length of the Amazon and its ultimate source have been topics of debate since the mid-20th century, with some claiming that the Amazon is actually longer than the Nile. The Amazon River is located in South America.

THE LORD OF SIPÁN

The Lord of Sipán his discovery was made in the town of Sipán in Chiclayo Lambayeque, Saltur annex of the Zaña district; It belonged to the Mochica culture that worshiped the god Aiapaec as the main deity, and they also worshiped the sea and the Moon. He was an ancient Mochica ruler from the 3rd century, a culture that dominated the north of Ancient Peru. Its remains were discovered in July 1987 by a Peruvian team of archaeologists led by Walter Alva and Luis Chero Zurita. This discovery marked an important milestone in the archeology of the American continent because, for the first time, a real burial of a Peruvian civilization prior to the Incas was found intact and without traces of looting. The wooden coffin in which he was buried was the first of its kind to be found in America and revealed the magnificence and majesty of the only ruler and warrior of ancient Peru found to date of its discovery, whose life spanned around 250 AD. was. 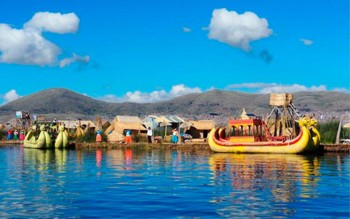 Lake Titicaca has an origin as ancient as it is mysterious with an antiquity of 3 million years, the highest navigable lake in the world is the natural border between Peru and Bolivia and contains an incomparable cultural, animal and plant wealth. Located in the Andean highlands in the central Andes, Titicaca is the highest navigable lake in the world with an average altitude of 3,812 meters above sea level, and also the largest freshwater lake in South America. Of its extension, 8,562 km², 56% belongs to Peru and 44% to Bolivia, serving as the border between both territories. It is estimated to be 3 million years old and has an average depth of 107 meters. The water temperature is 13º on average and more than 25 rivers pour their waters into Lake Titicaca. 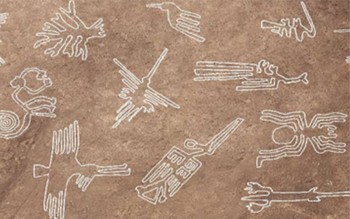 Ancient geoglyphs that inhabit the desert of the cities of Nasca and Palpa, in the Ica region (south of Lima, the Peruvian capital). Its imposing shapes, made in a single stroke and with a pulse that does not seem human, are to the liking of everyone who visits them. Impressive wherever you see them, although to appreciate them in their maximum splendor you would have to take one of the three paths already traced: climb the surrounding mountains (on foot), locate one of the observation towers that exist in the area (up to 12 meters high) or hire the service of a small plane. In the latter, do not worry, that yes or yes they will have a pilot in charge of the adventure through the skies.